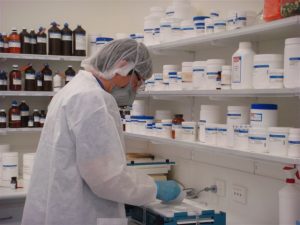 Naltrexone however has effects on non-opioid receptors as well such as TLR4 which is a receptor found on macrophages such as microglia. It is via this non-opioid antagonism that low dose naltrexone exhibits its anti-inflammatory effects. Microglia are cells within the central nervous system which when activated release pro-inflammatory factors that can become neurotoxic.

Due to the large range of inflammatory factors (e.g. proinflammatory cytokines, substance P, nitric oxide, and excitatory amino acids) produced the symptoms can be varied. It is suspected that chronic conditions such as fibromyalgia involve chronic glial cell activation and thus over production of reactive oxygen species and pro-inflammatory factors within the central nervous system.

Evidence thus far has suggested that Naltrexone blocks the production of these substances and improves symptoms in chronic pain syndromes such as fibromyalgia. This action may also extend to the peripheral nervous system as well with evidence of inhibition of TNF-alpha, IL-6, MCP-1 and others inflammatory agents in peripheral macrophages.

Starting dose of 0.5 mg once daily at bedtime around 9 pm up to resolves symptoms as follows:

Side Effects: Vivid dreams and sleep disturbances, should reduce over time, however the dose can be moved forward to 6 pm in the evening until the symptoms abate.